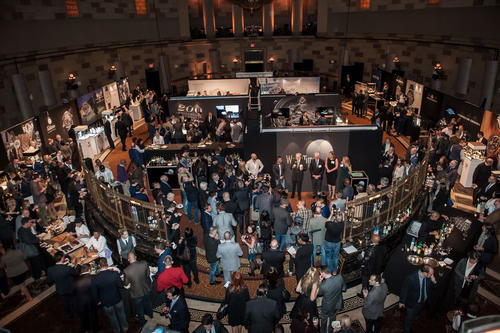 We had the opportunity to see and try on watches from the world’s most prestigious watch brands, and now we’re sharing with you the must-see watches that were revealed at the WatchTime New York event. We guarantee that these new watches will blow you away.

We’re highlighting three brand new watches from Graham, Romain Gauthier, and Chronoswiss, as well as seven watches that have never been seen in the United States.

Graham has unveiled an eight-piece limited edition Orrery Tourbillon, which was inspired by George Graham’s orrery invention in 1713. An orrery is a mechanical model of the solar system used to represent its relative positions and motions.

This watch features a mechanical solar system model (moon, Earth, and Mars) with a 300-year calendar. The solar system model includes genuine fragments of the moon and Mars, and the Earth is made out of Kingman Turquoise. The dial also includes hours and minutes, a Gregorian calendar, and a Zodiac scale. On the case back, you’ll find a year counter with planet correction indicators.

This Graham watch is powered by a manual wound movement that was exclusively made for Graham by independent watchmaker, Christophe Claret. The Tourbillon Orrery movement boasts a 72 hour power reserve and an incabloc shock absorber.

As mentioned above, there are only eight timepieces available. This watch is housed in a 48 mm pink gold case with a hand-sewn blue alligator strap. 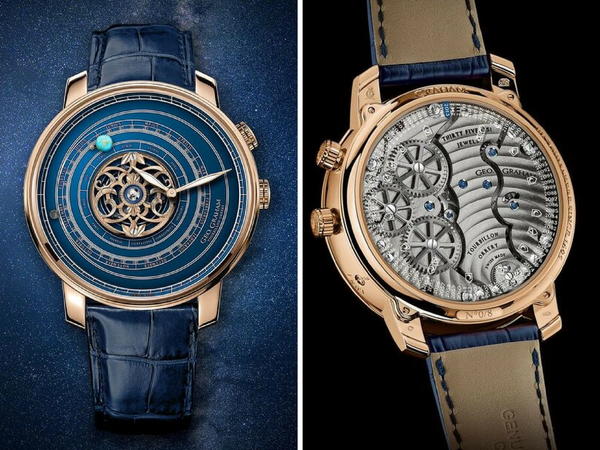 Romain Gauthier was another brand that revealed a never-before-seen watch. The Romain Gauthier Insight Micro-Rotor is an elegant timepiece that combines simplicity with splendor. The dial is unlike any other with hand-bevelled bridges, a small seconds sub-dial in the center, hour-minute sub-dial at 12 o’clock, beating balance at 6 o’clock, and a swaying micro-rotor at 9 o’clock.

The watch is powered by a beautiful, hand-finished in-house caliber, which boasts an 80-hour power reserve and a micro-rotor made from 22k solid gold. The dial gives a sneak peak of this automatic movement, and the case back showcases even more of this highly precise movement.

This 39.5mm watch is available in both 18k red gold and platinum, and there are a total of 60 timepieces created. The crown has been placed at 2 o’clock for added comfort, and the watch features a hand-stitched alligator leather strap. 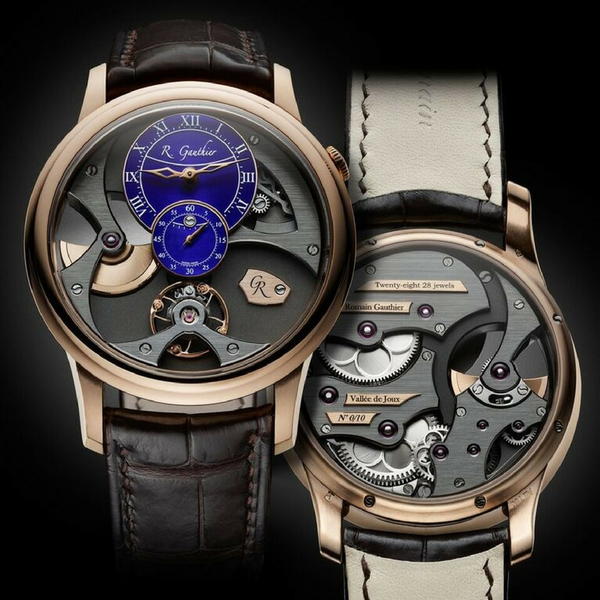 The Watch Index took on Sin City at this year’s JCK and Couture Watch and Jewelry Shows. We met with some of the top watch brands, and they showed us some pretty amazing watches. While at the shows, there were four trends that stood out to us, and we wanted to bring these trends back to you. The Top 4 Watch Trends from JCK and Couture

Chronoswiss revealed a stunning skeleton watch, the Sirius Flying Grand Regulator Skeleton. This watch features a dial that is barely there. Unlike other skeleton dials that look cluttered, this multi-dimensional Chronoswiss dial is easy to read.

The dial features a funnel-shaped hour scale at 12 o'clock, a running seconds sub-dial at 6 o’clock, and a central minute hand. There is a small counterpart under the minute hand that accurately depicts an inverse image of the minute scale, which is a unique feature that I have never seen on another watch.

This 44mm watch is available in stainless steel with either a blue dial or a gray dial, and there are a total of 60 timepieces created. The watch features a “horn back” alligator leather strap with red or gray lining. 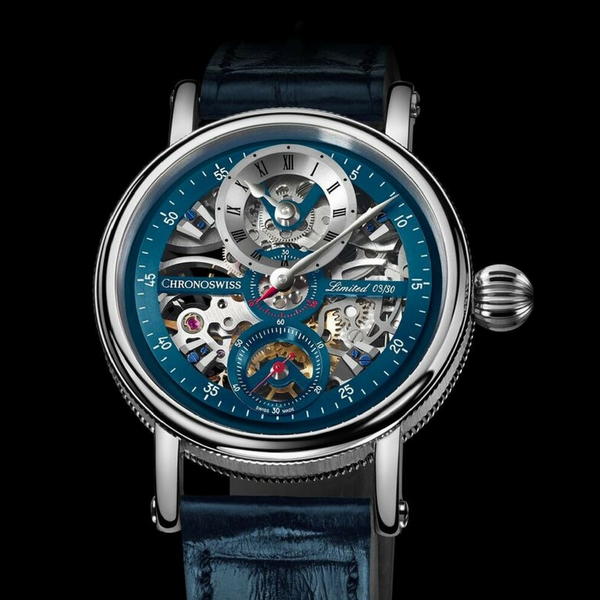 For the first time in the United States, Longines showcased their Avigation BigEye pilot watch to the public. This Longines watch is a reissued chronograph with a 1930s design, and the watch was inspired by Longines’ history of pilot watches and aviation.

True to the spirit of pilot watches, this watch’s dial is easy to read and focuses on the minute counter. The push buttons are also on the larger side, which enables the pilot to handle them even when wearing gloves. The semi-glossy black dial features Arabic numerals coated with SuperLuminova, a small second hand at 9 o’clock, a 12-hour counter at 6 o’clock, and an oversized 30-minute chronograph at 3 o’clock.

This watch is powered by the L688 column wheel chronograph movement, which was produced exclusively for Longines. The watch features a domed crystal cover and a vintage-inspired brown leather strap. 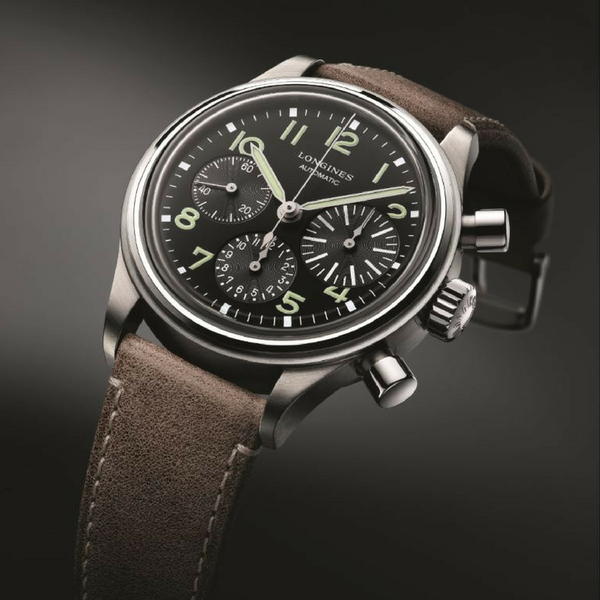 Commemorating the 50th anniversary of the Gulf Racing Strips, TAG Heuer has released the Monaco Gulf Special Edition. The watch was released at the end of August, but this was the first time the watch was showcased in the United States.

The original TAG Heuer Monaco was launched in 1969, and it was the first Swiss-made automatic chronograph watch that was both square and waterproof. The crown was positioned on the left, signaling that the watch did not need to be wound. Steve McQueen, while portraying Michael Delaney in the 1971 film Le Mans, insisted on wearing the Monaco watch during filming.

The new TAG Heuer Monaco Gulf features the emblematic blue and orange racing strips along with the Gulf logo on the dial, and the distinctive color scheme is maintained throughout the design of the timepiece. The dial also features a minute chronograph counter at 9 o’clock and a permanent second indicator at 3 o’clock. At 6 o’clock you’ll find an angled date window.

The watch is powered by the automatic TAG Heuer Calibre 11, a Swiss-made movement boasting a power reserve of 40 hours and rapid date correction.

This 39mm square watch is available in stainless steel with a blue sunray brushed dial. The watch features a blue perforated leather strap accented with orange stitching. The special edition piece is only available in the United States, and it retails for $5,900. 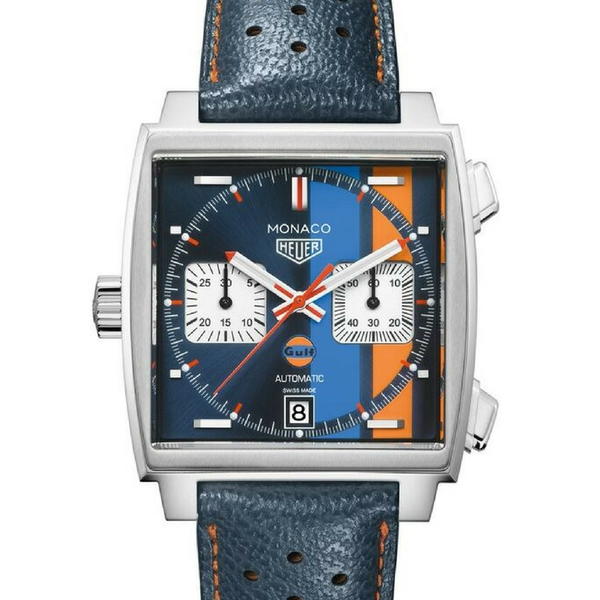 Frederique Constant, known for creating luxury watches at an affordable price, has released a new ladies dress watch. The Slimline Moonphase Stars Manufacture was released in September 2017 and showcased in the United States for the first time at the WatchTime New York event.

The Slimline Moonphase Stars Manufacture was designed by women for women, and it does not disappoint. This Frederique Constant watch is an elegant watch with a bezel set with 60 diamonds and a highly accurate moonphase complication at 12 o’clock.

The watch is powered by a new in-house automatic FC-701 movement, which has all of its functions regulated by the crown. You can watch this movement at work through the see-through case back. 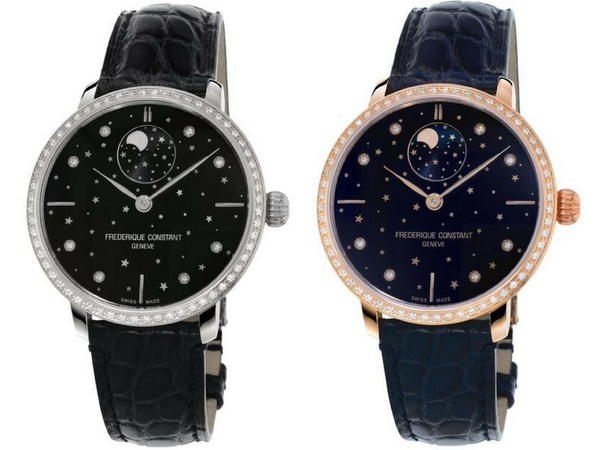 A. Lange & Sohne presented not just one new watch, but four new watches. All four watches—the Lange 1, Lange 1 Daymatic, Saxonia, and Saxonia Automatic—are now available in a classically elegant combination of a deep-blue solid-silver dial and an exquisite white-gold case. These four watches are part of A. Lange & Sohne Blue Series.

The Lange 1 and Saxonia designs remain the same, but the deep blue and silver color scheme makes these watches even more captivating. The blue color scheme continues with a dark blue, hand-stitched alligator leather strap. 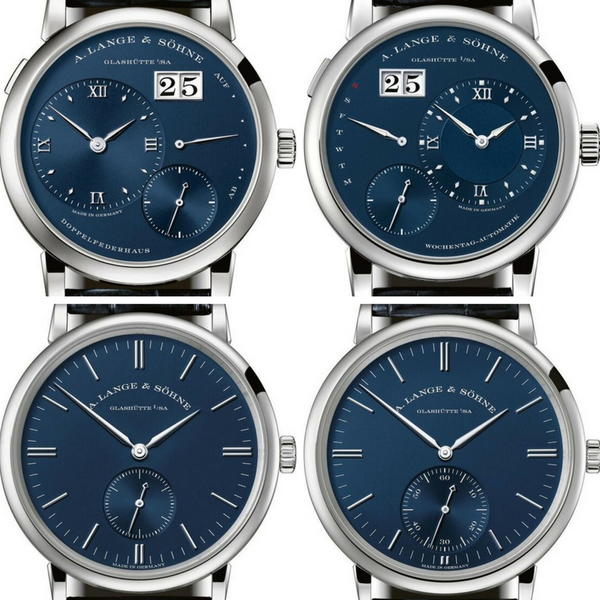 To keep up to date with current watch trends and industry news, The Watch Index decided to visit Chicago’s Burdeen’s Jewelry. Burdeen’s Jewelry is a family-owned business with not only luxury jewelry but also luxury timepieces.  Q & A with Burdeen's Jewelry: Their Top Watch Trends and Recommendations