Home > Most Popular Watches > The Evolution of James Bond's Watch 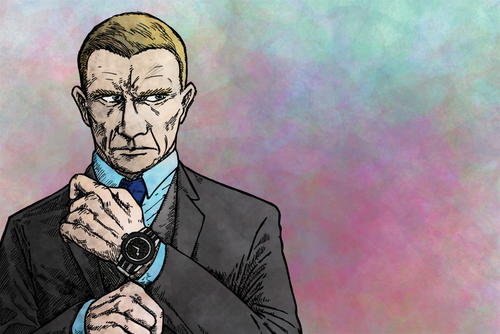 The first James Bond movie was released in 1962, and since then there have been 24 additional movies, ending with the 2015 Spectre. Throughout the years, James Bond has been played by Sean Connery, George Lazenby, Roger Moore, Timothy Dalton, Pierce Brosnan, and Daniel Craig. Although the James Bond actor has changed, the classic James Bond style has not.

One key element that is rarely overlooked is the wristwatch. James Bond's watch needs to withstand flying bullets, elaborate escapes, and hand-to-hand combat. Yet the watches also need to match his classic, yet understated, style.

To celebrate the extensive history of James Bond, we're going movie by movie and identifying which watch was featured. We'll also take an in-depth look at how Q, the mastermind behind the tech gear, takes a standard watch and transforms it into something extraordinary.

Dr. No was the first Bond movie, and it captured the attention of audiences around the world. In the movie, Bond wears a Rolex Submariner without a date display ref. 6538. The watch appears on a brown leather strap.

There is some debate as to where this watch came from. Some say that this was Sean Connery's personal watch, and others say that Cubby Broccoli, the movie's producer, lent the watch to Connery. It is widely agreed that Rolex denied the request for a free watch to use in the movie. 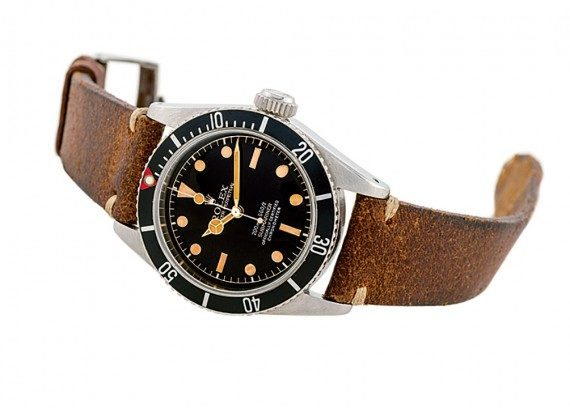 From Russia with Love : 1963 with Sean Connery

The Rolex trend continues in From Russia with Love with Bond wearing a Rolex Submariner Ref 6538. It is not surprising that the filmmakers decided to give James Bond a Rolex watch since Fleming, the author of the James Bond novels, owns a Rolex and has agent 007 wear a Rolex in the second novel, Live and Let Die.

In Goldfinger, Connery wears a Rolex Submariner Ref 6538 on a textile strap. The textile strap is much too small for the submariner, and this can be seen immediately by the width of the lugs in relation to the width of the strap. It is not known why the costume designers made this odd choice.

Pussy Galore, an aviatrix and the main Bond Girl, also wears a watch in Goldfinger. She wears the Rolex GMT Master Ref. 6542, a classic pilot's watch.

You Only Live Twice : 1967 with Sean Connery

There is quite a bit of debate concerning the watch worn in You Only Live Twice. Most movie buffs believe James Bond's watch is a gold Gruen. If so, it is suspected that the watch came from Connery's private collection.

When you stop and consider all of the different features and functions of a mechanical watch, it can be mind-boggling. You can easily become confused when terms such as chronograph, minute repeater, moon phase display, perpetual calendar, power reserve indicator, and tourbillon are tossed around. Now you can check out this Complete List of Watch Complications to help you better understand what your watch can do. The Complete Collection of Watch Complications

This is the first Bond movie without actor Sean Connery. Instead, George Lazenby takes on the role of 007. On his wrist is the Rolex Submariner Ref 5513 and the Rolex Chronograph Ref 6238. This would by Lazenby's only Bond film. However, it is rumored that he was offered a five-movie contract, and his manager suggested that he turn it down. 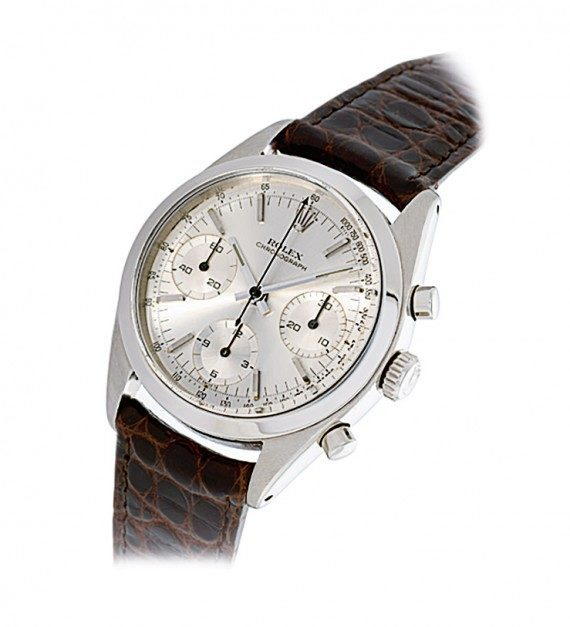 Diamonds are Forever : 1971 with Sean Connery

Sean Connery returns in Diamonds are Forever to uncover the elusive diamond smugglers. Throughout most of the movie, Connery does not wear a watch; however, there is one scene where the same golden watch from You Only Live Twice makes an appearance.

There's a new Bond in town with Roger Moore taking on the lead. In the opening sequence you can see 007 wearing a Pulsar LED P2 2900 digital watch from Hamilton. Later in the movie, Bond receives a Rolex Submariner Ref 5513 from Q. This watch is outfitted with a few special gadgets including a circular saw (useful for removing handcuffs) and a magnet for deflecting incoming bullets. 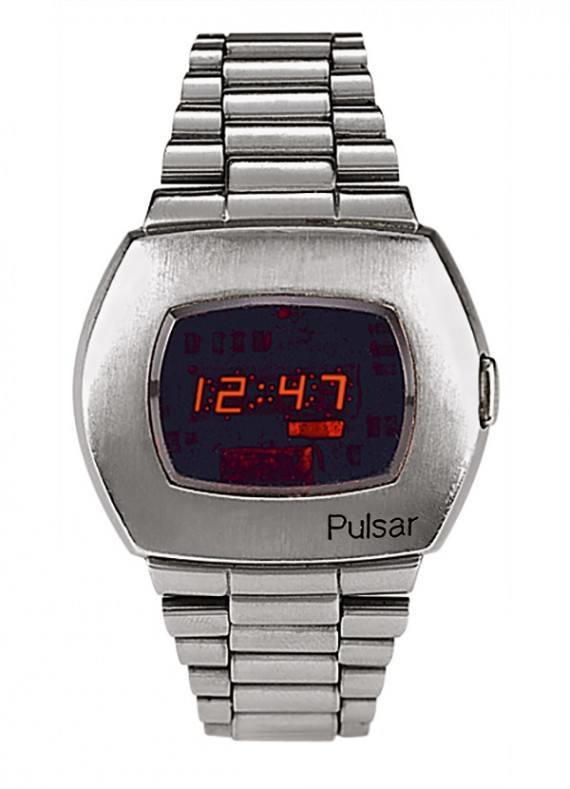 The Man with the Golden Gun : 1974 with Roger Moore

The gadgets from Live and Let Die are also seen in the 1974 movie, The Man with the Golden Gun. 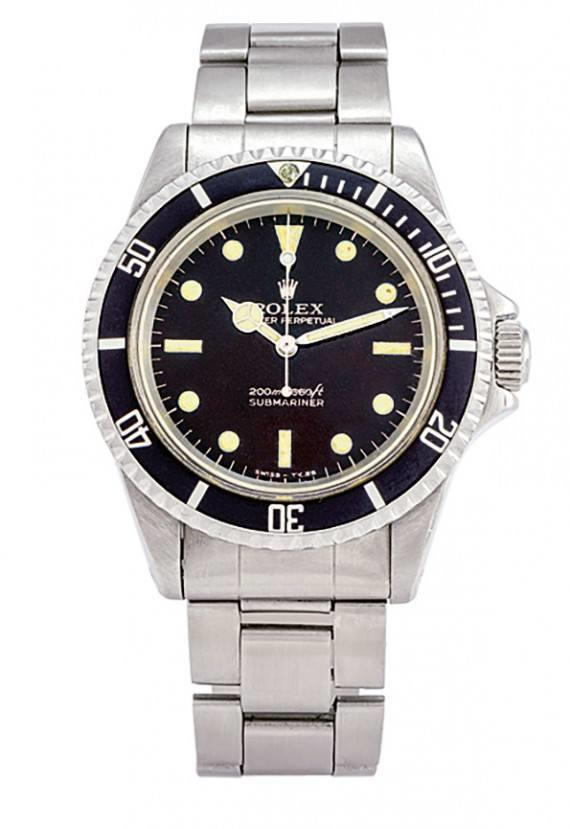 Bond's everyday watch is the Rolex GMT Master. Later in the movie, he uses a Seiko 0674 LC which functions as both a pager and label-maker. This watch includes a printer that ejects slips of paper bearing messages from M. This was an innovative way to share messages before the days of texting. 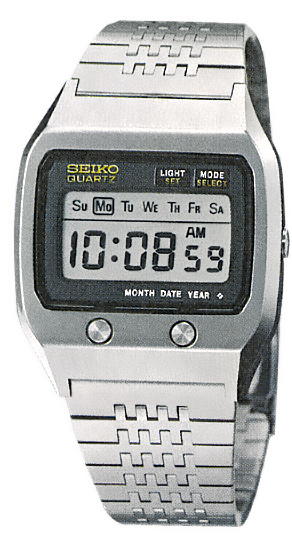 Bond leaves planet Earth for his next mission to defeat Drax Industries and their evil scheme. Helping him win this fight is his Seiko M354 Memory Bank Calendar. The Seiko watch, enhanced by Q, can fire two types of specialized darts. The first type of dart is steel-tipped and armor piercing while the second type contains cyanide. 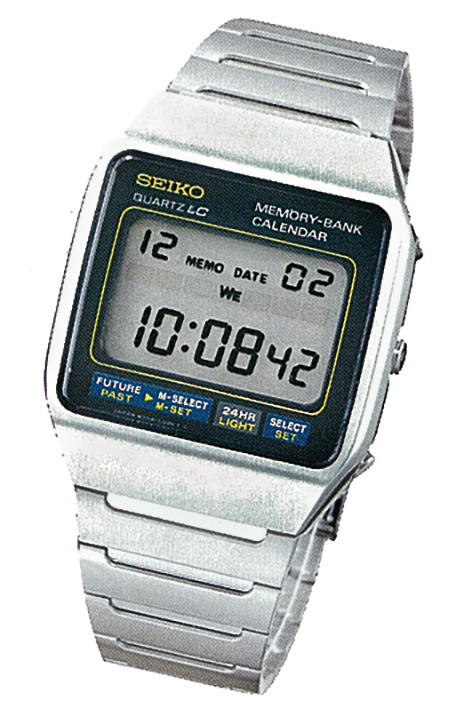 On the hunt for a lost British encryption device, Bond sets out to the west. During the movie, he wears two Seiko watches, the Seiko 7549-7009 and the Seiko H357 Duo Display. 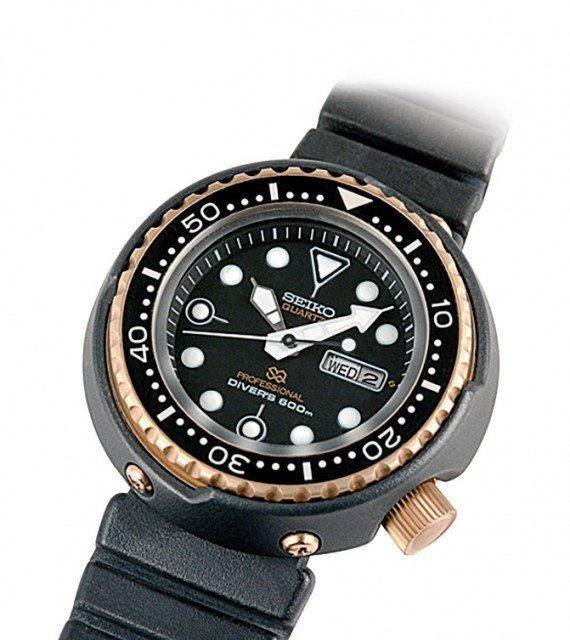 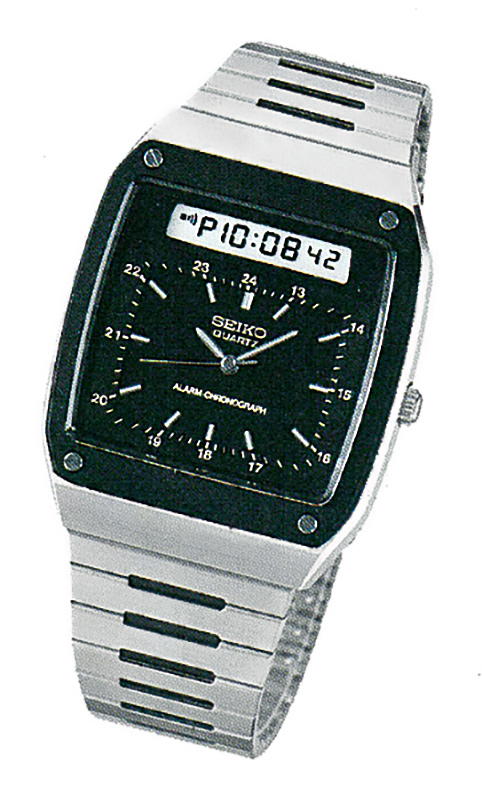 In Octopussy, 007 wears the Seiko TV which includes a tracking device placed by Q that is used by Bond to find the stolen egg.

A View to a Kill is Roger Moore's 7th and final Bond movie. Yet he goes out with a bang, wearing a Rolex Datejust and three Seiko watches, including the Seiko Diver 150m.

There's a reason James Bond's dive watches are water resistant. He expects his watch to withstand the water landing when he dives from bridges or jumps from helicopters. Although your watch may say it’s water resistant up to 30 meters, that does NOT mean that you can hop in a pool and swim a few laps. Understanding Watch Water Resistance 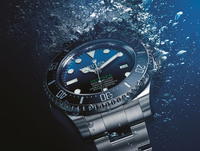 The Living Daylights : 1987 with Timothy Dalton

Timothy Dalton takes on the role of James Bond in The Living Daylights. He wears a TAG Heuer Professional Night Dive Ref 980.031. To our best knowledge, this is the only TAG Heuer to be worn by agent 007. 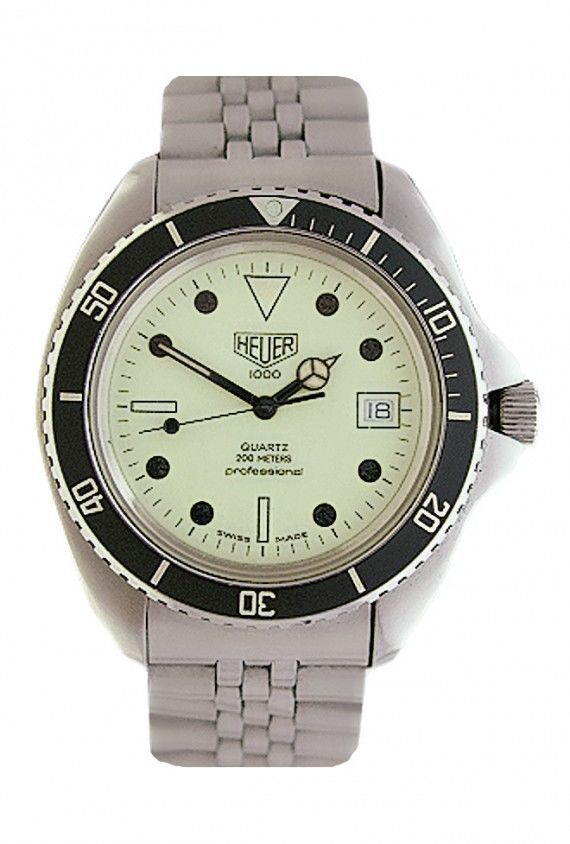 Although it was on a brief hiatus, the Rolex Submariner returns in License to Kill. 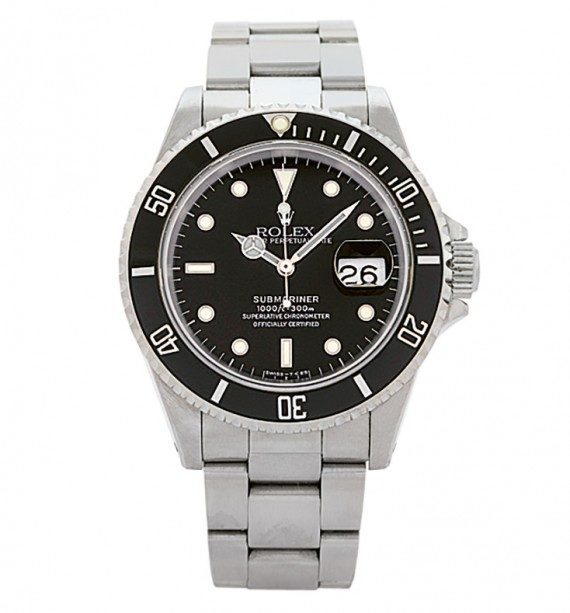 Pierce Brosnan made his debut as James Bond in Golden Eye. In the movie, Bond stops a rogue agent from hijacking a nuclear space weapon. Throughout the movie, he is seen wearing a Quartz Seamaster Professional 300m Ref 2541.80. From this point on, Omega is the new James Bond watch. It is said that a costume designer made the decision for this movie, and it stuck for the following movies. 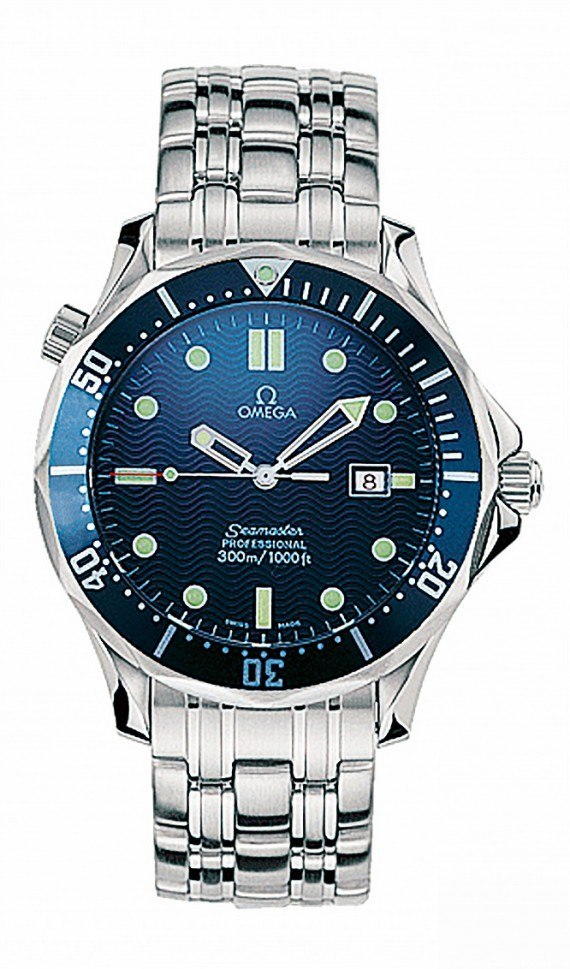 Brosnan continues his role as agent 007. He wears an Omega Seamaster Professional Ref 2531.81. 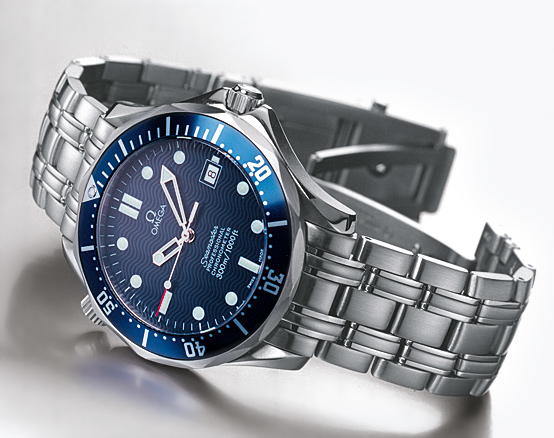 The World is not Enough : 1999 with Pierce Brosnan

The Omega Seamaster Professional Ref 2561.80 makes another appearance. This time the watch is outfitted with a few gadgets courtesy of Q. The watch includes a radiant light source and a rescue cable with grappling hook.

Die Another Day : 2002 with Pierce Brosnan

Once more, Agent 007's watch is cooler than any watch you could ever possibly own. The Omega Seamaster Professional saves Bond's live with an explosive charge in its helium valve. Bond detonates the watch via the bezel. If that weren't enough, the watch includes a powerful laser in the watch crown. 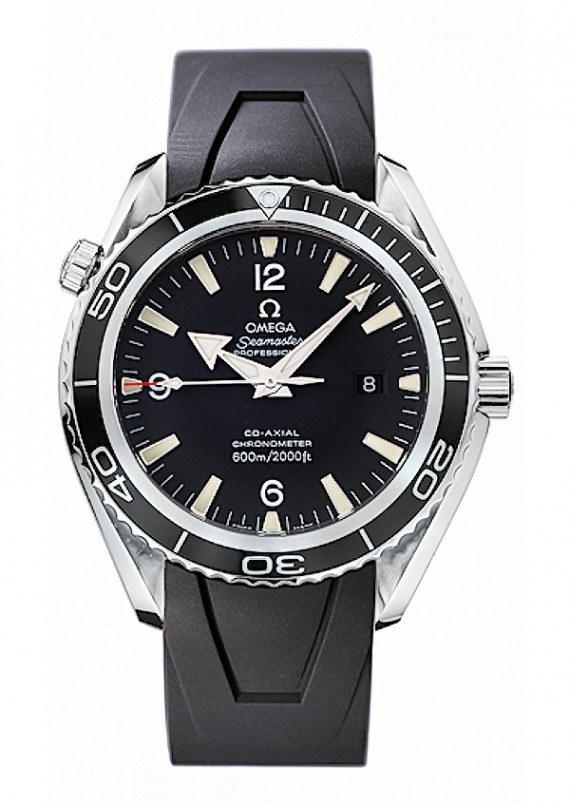 Quantum of Solace : 2008 with Daniel Craig

In Quantum of Solace, Bond can easily go for a deep sea dive in his Omega Seamaster Planet Ocean 600m Ref 2201.50. 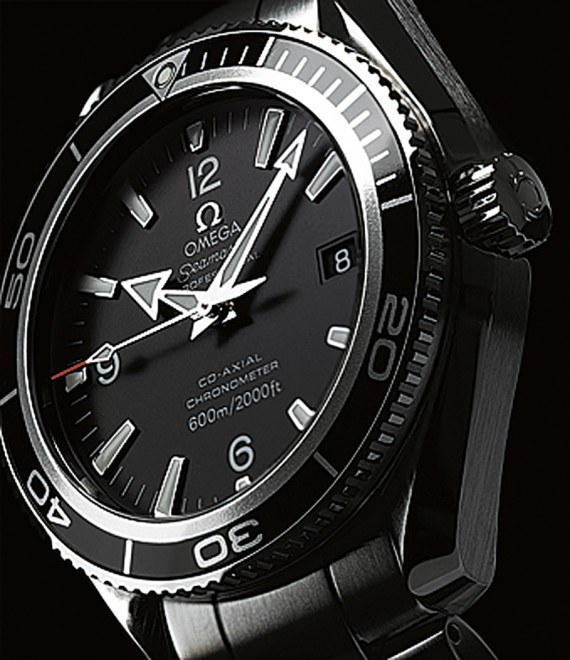 In Skyfall, Bond wears a custom made Omega Seamaster Planet Ocean 600m. Whereas the manufactured watches come in stainless steel, Bond has a titanium version of the same watch. 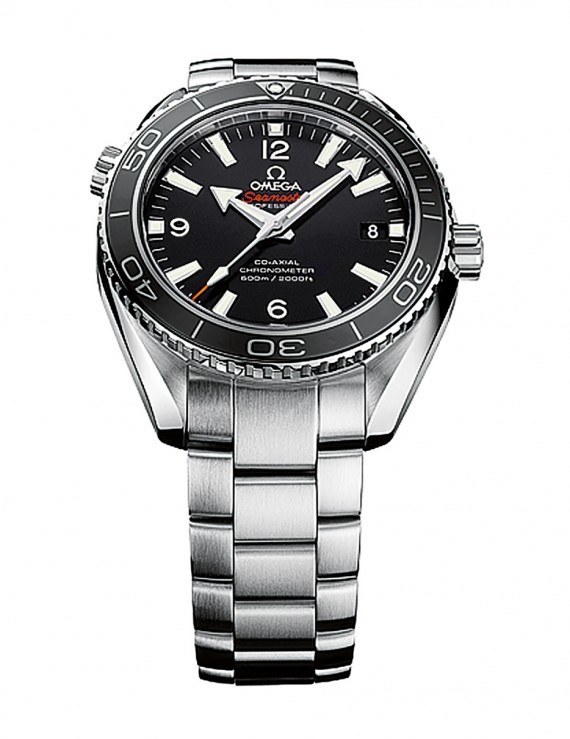 In the most recent Bond movie, agent 007 wears another Omega Seamaster, but this time it's the Seamaster 300 Spectre. He also sports the Omega Seamaster Aqua Terra in the opening sequence of the movie. 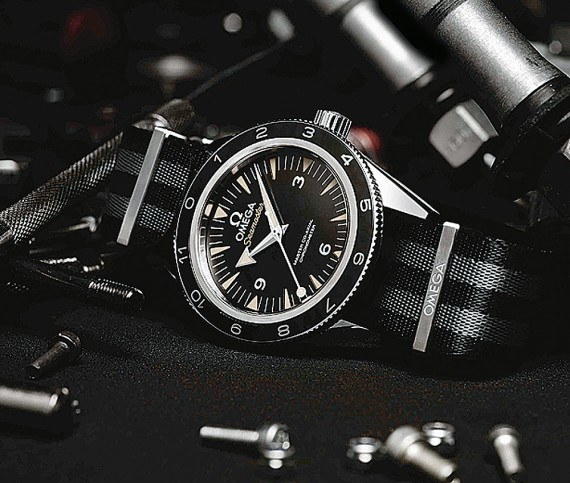 This is such a fun article. Thorough, too. I never thought to pay too much attention to the watches he wore. Now I know better.