Home > Watches 101 > What is the Dead-Beat Seconds Complication?

What is the Dead-Beat Seconds Complication? 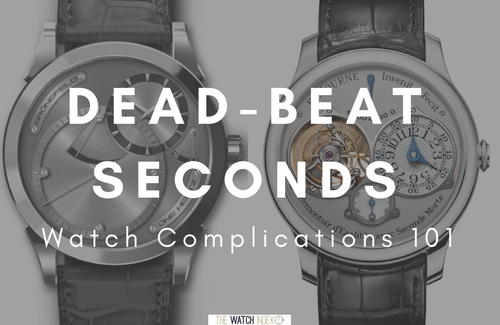 The idea behind dead-beat seconds may sound simple, but the mechanics are anything but. Depending on the movement, a typical mechanical watch with a spring-powered seconds hand beats 5 to 10 times per second, whereas a dead-beat seconds watch would beat only once per second. There is no one set way to achieve this rare complication. Some brands, such as Gronefeld, achieve the dead-beat seconds by using two gear trains (one for the seconds and the other for the hour and minute hands).  Another option is to use a single mainspring and a more complex gear train. This gear train would need to convert the balance’s oscillations into single one-second beats.

The Gronefeld brothers are known for designing watches with this rare complication, and they've even created a video to show the inner workings of a watch with a dead-beat seconds complication.

The first dead-beat escapement was created in 1675 by Richard Towneley at the Greenwich Observatory. Towneley created this complication for regulator clocks to make it easier and more accurate to set other clocks’ time. Forty years later, British watchmaker George Grahm revitalized this complication, and it became standard for pendulum clocks. By the 1950s and 1960s, this complication was miniaturized by watchmakers.

If there were an award for the most ironic watch complication, then the dead-beat seconds complication would win hands down. It is interesting that there is a high-end complication that imitates quartz watches, especially since there are watch collectors that scoff at quartz watches and believe them to be of lesser quality than mechanical watches.

If you’re a watch collector who owns a dead-beat seconds watch, you may notice that some watch snobs will scoff at your watch. Don’t worry though; you’ll have the last laugh. The watch snobs simply showed that they don’t know everything about the watch world. You and other serious watch collectors know exactly how complicated your watch actually is. That’s what matters in the long run.

(The watches shown in the image above are the Gronefeld One Hertz 1912 Dead-Beat Seconds Watch and the FP JourneTourbillon Souverain.)

When you stop and consider all of the different features and functions of a mechanical watch, it can be mind-boggling. You can easily become confused when terms such as chronograph, minute repeater, moon phase display, perpetual calendar, power reserve indicator, and tourbillon are tossed around. The Complete Collection of Watch Complications

Read Next15 of the Best Wedding Watches for Grooms: A Watch for Every Price Point

What is the Dead-Beat Seconds Complication?