History of the Swatch Group

When the Quartz Crisis hit in the early 1970s, traditional Swiss watch companies struggled to counteract the popularity of the inexpensive quartz watch. While some companies tried to join the quartz movement, many were too late for this strategy to be effective. This was the reality for two companies, ASUAG and SSIH.

Founded in 1931, ASUAG was the world’s largest producer of watch movements and parts. As for SSIH, the company was founded in 1930 and it originated from the merger of Omega and Tissot. Both companies held a stronghold in the Swiss watch industry before the Quartz Crisis. However, they both struggled financially to combat the success of the quartz watch. In 1983, the two companies merged to create SSIH/ASUAG Holding Company (later named SMH), and Mr. Nicolas Hayek helped lead the new company to success.

In 1983, the company launched the Swatch watch, an inexpensive quartz watch with a bold style and design. The Swatch watch was a high-quality plastic watch that included only 51 components, instead of the usual 91 or more. Almost immediately, the new brand of watches was a hit. In the first year, Swatch sold 1.1 million of the innovative plastic watches. After three years, they sold over 12 million watches.

Interested in learning about the independent watchmakers? Check out 23 Independent Watchmakers You Need to Know 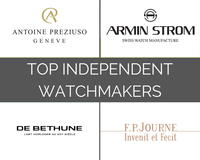 History of the Swatch Group